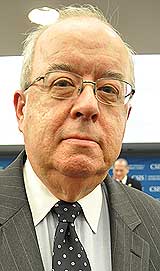 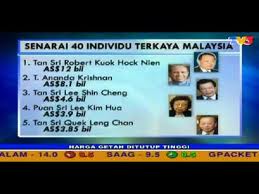 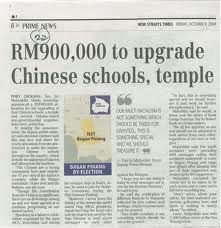 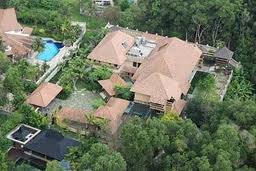 And to say that the Chinese are not allowed to participate in the social and economic structure is seriously painting things with a broad brush. Again - if this is really the case, like the black South Africans who were denied any economic slice of the country during the apartheid era - the Chinese in Malaysia would be destitute. There will be no Chinese ministers. No Chinese schools. No roads named after Chinese people who made it good. No Chinese man in the top 10 richest men in the country. And yet we have all Chinese schools, chinese chief minister, richest man in the country is Chinese, and many more! So I believe you are seriously playing the victim and exaggerating when you stated the first sentence in this paragraph. Have you ever looked up on which race that makes up the majority of the private economic sector? It's interesting that everyone always harps on the amount of the Bumis in government sector as opposed to the non Bumis but they always fail to mention the very small amount of Bumis participation in the big and lucrative private sector.

All I can say is that if you have the Pendatang mentality, then you will always be treated as Pendatang. Malaysia is best if you mingle and mix and be tolerant of everyone's cultures, including the Bumis. And that includes respecting the national language, school system and many more. If you migrate to America, you will learn English and learn the American way. By the 2nd generation your child would've spoken lovely English with lovely american accent, and probably scoff at you for being so 'Asian' as kids these days are wont to do. But you accept it because it is your adopted country. In Malaysia, not only some non Bumis refuse to speak or learn Malaysian language, they refuse to mingle with other races for fear of being converted or fear not being able to eat pork, or have perpetually bad impression of the Malays. There're some Malay politicians, bad apples that might justify this fear. But aren't there bad politicians everywhere? But the hate that I see on the net are targeted not just on the government, but also onto the people who have nothing do with the governing body - which made me think that sometimes it is deep set racism among these people, despite them calling other people racist! Which in turn made them unable to respect the national language, which associated with the Malay language nor respect the Malay culture, which because of the Malay majority and geographical history, is the basis for the culture in Malaysia.

All I'm saying is that why can't there be a fair and balanced view comprising of both the Bumis and non Bumis? and it is greatly unfair for you to play victim all the time as though you're being discriminated like the Ugyhurs in Xinjiang or like the Jews during Holocaust. THOSE are real discrimination. In your case it is a grudge caused by having the impression of not having more than you think you should have.

My own grandfather was an immigrant too from Java. But he integrated, learnt the language, adopted the culture and essentially, became Malaysian. I am glad for his wisdom, tolerance and patience, as well as his understanding that to start anew is sometimes to cast your past and allegiance to another country aside and pledge loyalty to the adopted new country. Not to start a 'country within a country'.

Sarcastic response(as your article) and Denial Mentality (as Umno leaders and also majority of communal Malays) are the best examples articles for failing racial relationship in Malaysia.

This is exactly why the other races are finding it hard to make Malays understand or work to improve ethnic relations.

Majority Malays with your opinion are usually:
i) lack appreciation for other cultures
ii)or None/few friends of other races
iii)or Grew up and studied in Malay area/school with very few opportunity to mingle, befriend and enjoy the friendship of other races.
iv)or First few generations of Indonesian who do not have the inter-racial bond.
v)or Does not need friendship of other races
vi)or believes Malay race and Muslim religion is supreme
viii)or Still considers other races belong to their country of origin, should return to their countries and leave the wealth of Malaysia for the Malays alone.

My many nice Malay friends who feel, understand and sympathetic of my problems and my minority race are:
i) those grown-up together with Chinese and Indians, did homework together, have had school lunch together, have visited each others house and parents, have participated in sports together, have sincerely wished greetings on festivals
ii) Or have been educated overseas, surrounded by more foreign faces than Malays, helped by other races to succeed in academics, have seen the miracle of cultural diversity, have seen the level of multi-faith integration.

Your article is not wrong, its correct for you and your like minded friends, it just short or appreciation for the feelings of the 'other' people.

HEY..I CAN SPEAK ENGLISH TOO BUT I'M NOT WHITE said...